No way in hell is he an ordained Catholic priest.

Yeah, I know what you’re thinking… Biker, cage fighter, Russian mafia hitman, maybe. Man of God, not so much. Because of the tat‑sleeves or six-pack? Pierced nipple, perhaps. Is it the sun-streaked blonde hair and granite-hewn features making you doubt? It’s okay, I get it. Priests don’t typically come packaged in six-foot-two frames of shredded muscle. They don’t have panty-melting smiles or bedroom eyes the color of an ocean squall. They don’t make you think 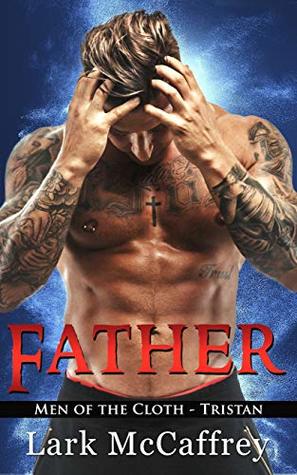 fallen angel.
No ma’am, I’m not anyone’s idea of a cleric, lookswise or otherwise. I think about sex a little too much. I’m not always good about following the rules. I drop F-bombs. I have a temper. And yeah, have shamefully broken a few vows. Would it also surprise you then to learn that despite all of the above I truly love God and the Church? That I received my calling when I was just nine? That I’d planned my life for the priesthood yet almost gave it all up for a woman?

Now just so we’re clear… This isn’t going to be some sappy romantic rendering of forbidden love à la The Thorn Birds. Sorry to disappoint. As for those expecting a smutty one-handed read about a hot holy father sporting junk as huge as his ego, apologies again. My name is Tristan, aka Father Cleary, and whatever else you may think this story is about… I respectfully suggest you think again.

Father is the first book in the stand-alone series, Men of the Cloth. Please visit website for more info.

Forgive me Father for I have sinned.  I’ve lusted after the local priest, who I can’t get out of my head!  Ugh Father Cleary is just dreamy and I want him like I want my next breath!!

Father Cleary gave his heart once to a girl, the girl of his dreams only to have her leave town and him behind. So he turned to his second love, the church and God. They would never leave him. Through the years he knew about Kady’s coming and goings in the town to see her family, but never run into her. Until she sought him out, to tell him her version of the truth. Only he doesn’t care anymore, he’s done. He’s moved on. So should she. his brain says one thing, but his heart says another thing.

The story is full of highs and lows. I felt for both of them. This is a story about love, forgiveness, and acceptance. The characters are relatable and the plot moves at a good pace to keep you interested.