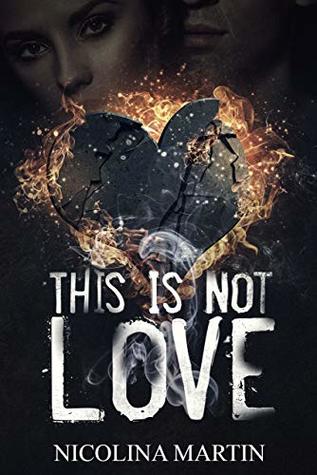 Two years after she was almost killed by her abusive boyfriend, Bree Elliot still struggles to move on, alcohol and sleeping pills her only support. She meets her soulmate, in a most unexpected way, when she’s taken hostage by Roarke in a bank robbery that goes to hell.

Roarke Brennan thought he had everything under control, but when a mysterious girl catches his attention, and a bullet nearly ends his life, he sets out on a chaotic path to destruction. Bree took everything from him. It’s time to return the favor.
Surely it’s a meeting that can only end in disaster. Or must it? If it feels like love, why can’t it be?
This Is Not Love is a dark romantic tale that takes you to the deepest pits of obsession and passion.

Warnings for abuse, blood play, dark themes and a descent into mad obsession. It’s a stand alone book with its very own version of HEA, but you don’t have to squint. I promise. Suitable for an adult audience, read at your own discretion.

This is a short story, but a deep dark story.

Bree is alive, she is existing, but that is it. She’s a scared rabbit waiting to be snatched up by a hawk. Then she crosses paths with a hawk, that wants to toy with her, not eat her. At least not right away. The hawk, Roarke, and the rabbit do a dance, trying to figure each other out. Roarke doesn’t want to kill Bree, he wants to toy with her. He wants to learn her, to figure her out and when he does, he realizes to his chagrin that she isn’t a rabbit, she is a wounded hawk trying to flap her wing and live. Only does she want to live? Or is she waiting for Roarke to finish her off?

This is a dark romance about 2 wounded people who don’t know what love is. You get a hint at their background, but not too much. Mostly you focus on the here and now of what is going on. About their interaction and their crazy love.