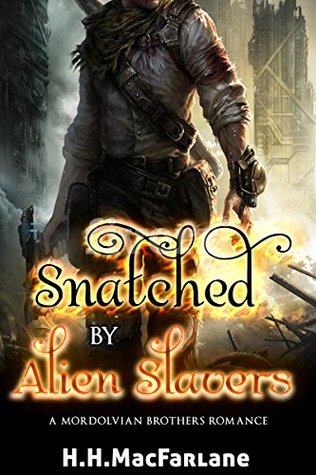 Franki has just survived the crappiest date ever and has sworn never to use a dating app again and then her car breaks down. When she steps out of the car she is snatched by aliens and knocked out cold. When she wakes, she finds she will be fighting for her life in arena style death matches.

The Destroyer, a sexy Mordolvian with silver skin and blue tattoo’s, is intrigued by the gutsy human that has just been brought into the cages. As time passes he finds he more than wants to save this human, he wants to keep her.

They must survive the fights and escape these slavers. Their adventures are just beginning…

***This book is meant for readers over the age of 18. There is explicit language, adult situations, and adult content. If this makes you uncomfortable, please pass on this book. If not, happy reading!!***

Franki is kidnapped. By an alien who is going to force her to fight for her life. If she wins, great, she gets to fight another day. If she dies, oh well. Someone will replace her. In the cell, she meets other females species. They too much fight. One fighter is kept chained to his cell – The Destroyer. He is feared. Once they find out Franki is a healer, they stop making her fight. As long as the fighters are alive, she will be alive. Franki wants out and she knows the Destroyer does too. They make a plan and try to escape.

The Destroyer knows he wants her as soon as he sees her. She isn’t afraid, she is a fighter, just like him. With her help, they are able to get free and make it off the ship to his planet. Along the way, he claims her as his mate and things start ramping up. They aren’t home free yet, because a crazy female on his planet has designs to make D her mate. Can Franki and D survive this mess?

I loved the beginning of the book, where they had to fight for their lives, it was action packed and kept me interested. Once they were on his planet I kind of lost interest. Even with Carnella. She just didn’t do it for me. It was a weak subplot and one I’ve read countless times before.