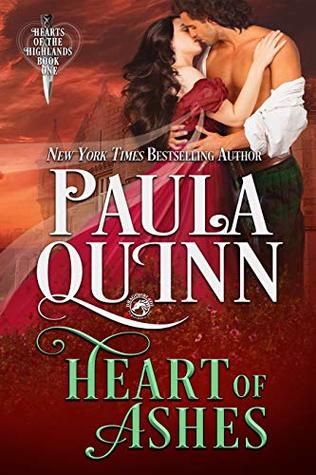 Read Book One in a fabulous new Highlander Romance series, only from NYT Bestselling author Paula Quinn! Read for FREE in Kindle Unlimited.

A Scottish warrior and a Norman maiden clash in this stunning epic!

Cainnech (Cain) MacPherson’s hatred for the English was born when he was a lad of seven, the day they raided his village and killed his family. They took everything from him without mercy and tossed him onto the battlefield, where the memory of love faded to dust and left nothing in its wake but violence.

Now, as Robert the Bruce’s most formidable, most lethal warrior, he wreaks havoc on his enemy, taking land by force and without mercy. But when he raids a small castle in Northumberland, he faces his greatest opponent yet—a bold, beautiful Norman lass who will see him dead at any cost rather than give up her home…even if it means tearing open his armored heart and stirring the ashes that remain.

Aleysia d’Argentan will do anything to keep the hated Scots out of her castle and away from her villagers. She has prepared for this day for the last four years, building traps in the forest, poisoning the grain, and hiding daggers wherever she could use them to kill her enemy. But she isn’t prepared for the brawny, brooding Highland warlord who invades her life—and her heart. He is an infuriating, irresistible opponent with a curious touch, a smoldering kiss, and a reluctant smile that begins to shine on her alone.

Can the ashes of his heart be stirred into flame by his enemy?

It was not the historical romance I was searching for, but still a good book.  I love a good sexy Highlander book just like the next girl.  While Cain was battling his heart and body, he was losing the girl – ME!

Aleysia is going to keep her home from being taken by the Scot’s. She has traps to prevent them from getting in and if they do, they will die from the poison in the bread and wine. Then she meets and falls for the commander. A brute of a man, who doesn’t know love. His entire life was ruined by the English, his brother’s taken from him. Now he has a chance at love with Aleysia. His body wants it, but his mind is a coward and he runs from her and the love she can give him. That is until King Robert of Scotland sends over suitors for Aleysia to choose from. This spurs Cain into action!

I waited till the end of the book for the sex to happen and then when it did *sigh*. All the hype and build up, the sexual tension, the forbidden kisses – he’s afraid to touch her and I get it. He is a warrior, but so is she.

William Stone is an amazing character – I loved him.  I want more about him.  The writing is descriptive and creates a beautiful backdrop to the romance going on around Aleysia and Cain.  I loved how feisty Aleysia is.  That she is willing to do all this for her people.