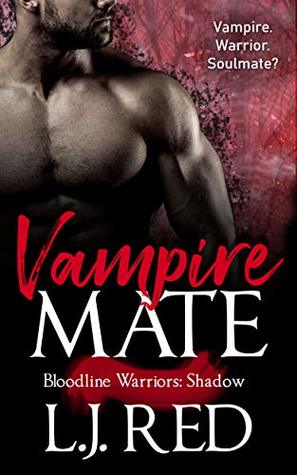 Brutally dangerous and scorchingly sexy, Lucian is the leader of the Shadows, elite vampire warriors caught in a deadly battle against the wild and power-hungry vampires who want to rain terror on humankind.

Lucian doesn’t believe in soulmates but from the moment he meets Dana, all he wants is to possess her completely. His iron control is beginning to fray and when it snaps, there’s nothing in the world that will stop him from taking her.

Dana’s a cop on the trail of a blood-crazed vampire tearing through Chicago. She doesn’t want anything to do with vampire politics but when she overhears a plot to kill the leader of the Shadows, she knows she has no choice but to warn him.

Braving the dark, seductive world of the vampire elite, she’s helpless to resist the powerful bond she feels the moment she meets Lucian.

Can they catch the killer before the fire raging between them burns the city down?

Dark themes and steamy, sensual scenes. These alpha male vampires are vicious, brutal warriors who will stop at nothing to protect their fated mates.

** Disclaimer – I love a good vampire book.  Such as the Black Dagger Brotherhood – amazing series, you should check it out.  **

I liked it, but yet it didn’t hold my interest the entire time. I started to skim after 50%. It wasn’t hard to figure out who the Monster of Chicago was. I say let the vamps run Chicago – maybe they can clean it up better than humans.

Dana is a cop, she gets the drop on some vampire activity and needs to let the vamps know. Only the vamps and humans don’t get along, unless the vamps are using the human’s for blood. Sneaking in she looks for the Shadow who is going to get whacked. Once she relays the message, she follows the guy who took it and realizes that he’s the Shadow. From there they go on a quest to find the Monster, save the vamps, and win over Chicago.

I wasn’t impressed with Lucian or Dana. Lucian fell flat for me as a vamp. He was moody, he hand fangs, and he drank blood. But there was nothing about him that made me what him to bite me and be his soulmate. Neal on the other hand. I can’t wait to read his story and he only had a small blurb in this story!!

Dana is your stereo typical cop. Lives at the station, has no friends but the people she works with. Always working. I’ve seen and read enough of these characters. Even her bond to Lucian seemed odd to me. Usually when there is a bond, the further away they get they hurt more and more. Dana hurt, but she was so focused on her case that her pain was secondary. To me that should have been the forefront of her problems.