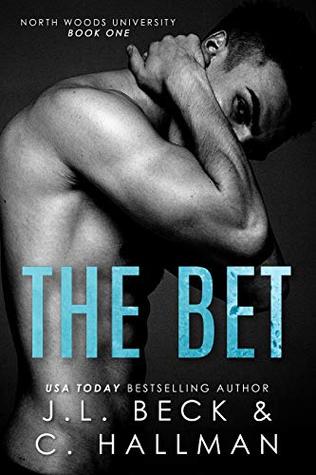 “He was my best friend…” I say more to myself than her.
“Yeah, so was I but you seem to have forgotten that part of your life.”

It wasn’t hard for me to do, in fact, it was something I did all the time. I was known for breaking hearts. Sex was just that, sex. And it didn’t take me very long to get a woman on her back.

And then I drew her name: Jules Peterson.

My former best friend. My first kiss. My first love. She shattered my heart into a million pieces three years ago. She left me right when I needed her most.

And as fate who have it, she had entered my life once again, at almost the perfect time.

Holding onto that hate, that anger, that f*cking heartbreak. It does something to you. It breaks you, and it broke me, it tainted me, just like I would do to Jules.

She used to be my everything, but now she was nothing but The Bet.

**The Bet is book one in the North Woods University series. It is a full length, standalone, novel. It contains adult themes, and content not suitable for all readers. It is NOT a young adult novel.**

Remington and Jules grew up together. There was always a special connection between them. When Remington’s world is falling apart, Jules leaves him too. He doesn’t understand why she left him when he needed her the most. Three years later, she is at the same college with him. His feelings are all over the place, but the one he focuses on his anger. He’s going to make her life hell. Yet when he see’s her with a frat buddy, the anger isn’t directed at her. Remington can’t stop thinking about Jules and their past and what the future might hold for them. When he finally realizes that he wants Jules in his life, will it be too late? Does she already hate him for everything he’s done to her?

Seeing Remmy was like coming home. Three long years without him. But this isn’t the Remmy she knows and loves, this Remmy – excuse me Remington is a dick. She is quick to dismiss him. As much as she tries to avoid Remmy, he is always there. Causing problems. Yet one night he saves her from a bad choice. A choice she didn’t make for herself. Then he’s back to the old Remmy that she knew. Yet the past won’t just die and go away. It looms over Jules again, wanting what it was denied. Can Remmy save her in time?

I really enjoyed this story. Remington was a complete jerk in the beginning, but by the end of the story, you understand him better. It doesn’t excuse what he did. He comes full circle and realizes what he wants. But his past is looming over him like a black cloud. Once he gets that settled, things are good between him and Jules.

The story flow was really good, and the character development was good too. I liked their past.