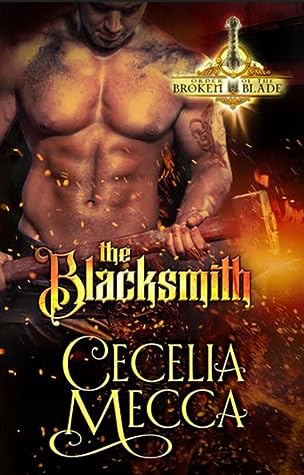 Four men. One mission—to save England. Love will have to wait…

Lance Wayland has a secret purpose for becoming Stanton Castle’s new master smith. He and his three closest friends are the founding members of the Order of the Broken Blade, formed to blunt the power of King John, whose outrageous taxes and unjust laws have taken a toll on the country they love. To succeed, they need money and men, both of which they can get from the Earl of Stanton. Lance’s mission is of vital importance, and can only be waylaid by one thing—his interest in the earl’s lovely daughter.

Idalia knows better than to think she’ll be allowed to marry a smith, yet Lance Wayland is the most compelling man she’s ever met—a welcome diversion from the stresses of running Stanton Castle and her mother’s illness. Although she knows the entanglement can go nowhere, their connection grows stronger each time they see each other, until she begins to forget all the reasons they should stay apart.

Although fate seems determined to keep them apart, Lance and Idalia are drawn together like moths to a flame. But can Lance pursue the woman he loves without betraying the order to which he’s pledged his troth?
…………….

SNIPPET FROM THE BLACKSMITH

“More than that, I would like nothing more than to lay you down on that altar, strip you of every bit of clothing, and show you much, much more than a simple kiss.”

He stood so close now Lance could smell the unique scent of citrus blossom that was Lady Idalia of Stanton.

“What,” she asked, swallowing, “would you show me?”

The combination of curiosity and fear in her tone, in her gaze, told him she knew this was wrong. It was madness, really. But she asked, so he answered.

That last bit, he’d not meant to say.

This is my first book by Cecelia Mecca. I picked up this book and the 2nd book in the series recently. I’m glad I did.

This book is all about world-building and getting to know Lance, a member of the Order of the Broken Blade. He is sent to Stanton to ask the Earl for his help in overthrowing the current King. But first Lance needs to do his research and try to gauge the village folk and the Earl. What ends up happening is Lance falls for the Earl’s daughter, Idalia. He knows a union between them would be fruitless. That doesn’t stop him from seeing her, talking to her, and kissing her.

Idalia helps her father, the Earl, run Stanton. With her mom being sick she stepped up once her older sister married off. When the new smith comes to the village, she welcomes him. She even helps him win over some of the people and she falls in love with him and what he does to her body. What she doesn’t like is that Lance doesn’t come to her for advice. He goes straight to the Earl, bypassing her and making it look like he doesn’t care. Does he care? Does he give one fig about Idalia?

I liked the history of this book, the great characters, even the mom who is sick is amazing. The end wrapped up nicely and there is no cliff hangers. Can’t wait to start the next book in the series!