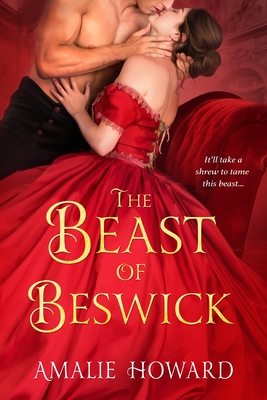 The Beast of Beswick by Amalie Howard

The Duchess Deal by Tessa Dare meets Taming of the Shrew in the start to a new Regency series from award-winning author Amalie Howard.

Lord Nathaniel Harte, the disagreeable Duke of Beswick, spends his days smashing porcelain, antagonizing his servants, and snarling at anyone who gets too close. With a ruined face like his, it’s hard to like much about the world. Especially smart-mouthed harpies―with lips better suited to kissing than speaking―who brave his castle with indecent proposals.

But Lady Astrid Everleigh will stop at nothing to see her younger sister safe from a notorious scoundrel, even if it means offering herself up on a silver platter to the forbidding Beast of Beswick himself. And by offer, she means what no highborn lady of sound and sensible mind would ever dream of―a tender of marriage with her as his bride.

4 stars
It’s been a while since I’m ready a Regency Romance. I’m glad I picked up this one to read. It will NOT disappoint you.

Astrid and her sister, Isobel are living with their Uncle who is trying to pawn off Isobel on an unworthy match for marriage. Astrid decides that she must make a marriage that will protect her and her sister. She turns to the Duke of Beswick, the beast if you will. Knowing full well, he’ll be the only one who can save them. When he rebuffs her and her advances, she uses her female ways to entice him. It’s only when the intended match for Isobel rears his face, does the Duke proposes marriage to save her and her sister. Can she save her sister and herself? What about her heart?

Thane knows what he looks like, he’s heard the rumors of himself. He earned the title Beast. Thane understands Astrid’s predicament, but he can’t help her. No one should be tied to him. It would be a mistake. Yet, when she offers herself up on a platter, how can he refuse her? Even when she says the marriage will be in name alone. She is a goddess, worthy of someone better, he can’t let her go. She is his for the taking. Allowing her to work for him, is all the protection he is willing to give until he finds out who the man is that wants to marry Isobel. Then all bets are off.
Will he lose his heart along the way? Will he lose Astrid to someone better? Or more handsome?

I felt terrible for Thane. He was wrestling with so many demons that it just didn’t seem like it would even pan out. I cheered for them. I loved Aunt Mabel and the host of other secondary characters. Thane is amazing. He is definitely my new book boyfriend! Yes, he is moody and surly. But he’s doing what he thinks is right by Astrid. The story flowed and had no hiccups that I remember.