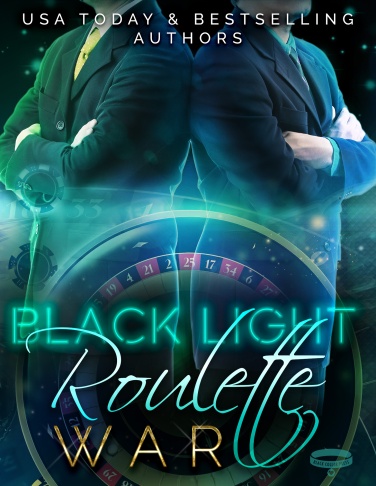 Wicked by Jennifer Bene – Tori has always been the baby girl looking for her perfect Daddy, but after years of disappointment could Pierce — a notorious trust fund bad boy — be the one she’s always needed?

Prelude by Renee Rose – I came to Black Light on Bratva business, but now that I’m here, I know exactly who I want: the lovely blonde who doesn’t belong here. The one who requires a delicate touch. And I swear, by the time I’m through with her, she’ll be begging for more.

Unexpected by Measha Stone Seeking a night of stress relief, Quinn signs up to spin the wheel at Black Light Roulette. But she’s off to a rough start when her nerves sabotage her ability to be a good girl. Things don’t improve when she spins an activity that offers more anxiety than relief. Jack promises to deliver exactly what she needs, but he’s a stranger. Can she ease her defenses enough to let him see the real her? If she does— will he stay or will he cry off?

Trained by Sue Lyndon – Daddy Xavier knows Dolly will make the perfect little baby kitten, even though she’s a complete newbie at pet play. The adorable brunette simply requires training—and he plans to do a thorough job.

Inflamed by Golden Angel – Their mutual attraction is hot enough to burn the club down and Master Elliott knows it, even if he won’t admit it. He’s a sadist with fiery kinks and he chooses his subs wisely. But Lisa knows Master Elliott is wrong about her and she’s signed up to Roulette night to prove she can handle whatever the wheel throws her way. When the wheel stops spinning, all bets are off.

Burn by Kay Elle Parker Montana millionaire Finnegan McLeod spends his life gambling on the whims of nature but he’s never been more enthusiastic about taking his turn at a Roulette wheel. Luck falls on his side, throwing little Ava Conway in his path. She fits him like a glove in every way. The only question is, when they come together how hot will they burn?

Free Bonus Menage Limo Scene: (give away at will – has links to whole BL series) https://dl.bookfunnel.com/wo4v0dr78s

During this Roulette, only one can come out on top.

More than bragging rights hang in the balance when couples risk their hearts in this wild game unlike any other.  With stories from Jennifer Bene, Livia Grant, Renee Rose, Measha Stone, Sue Lyndon, Golden Angel, Eris Adderly, and Kay Elle Parker, everyone will be betting on this sizzling game of chance.

Just as the marble fell into its slot, the stress of the day and heat of the room combined with the dizzy feeling from watching the wheel spinning caught up to her. Stephanie wobbled on her feet enough that Master Wilde had to reach out and steady her with a tight grip on each of her hips. He crowded closer, molding his muscular chest against her back to help prop her up. “Whoa, I’ve got you, baby.” Baby? Stephanie Kranowski was no one’s baby, least of all some guy she’d met thirty seconds before. “I’m not your baby,” she whispered back, trying not to make a scene on the stage. “Oh, baby. Tonight you’re gonna be whatever the hell I want you to be.” His ominous words flowed over her. Most women might be afraid of the edgy promise he’d whispered against her ear, but to Stephanie they were like a long-lost song she’d been waiting to hear again. As the wheel finally came to a halt, her Dom for the night chuckled. “Hey look at that. The perfect kink to marry up with the belting you’re going to receive. I’ll have to consider changing over to a nice crop instead of my belt.” Fucking great. I rolled Pony Play.

“Are you a dirty girl, Tori?” he asked, squeezing her hip in a firm grip. “Have you ever been treated like a filthy little slut, or have you only let people call you Baby?” Her brows pulled together, a flicker of something on her face that he actually couldn’t figure out when she replied with, “I’ve only let people call me Baby, sir.” Hmm… Lifting the marker, he carefully wrote the words ‘DIRTY GIRL’ on her right thigh. “Do you know what dirty girls get, Tori?” “No, sir,” she replied, her eyes glued to the stark contrast of the black marker on her pale skin. “Exactly what they deserve.”

I note Lady Luck’s movement before I even turn back. Then I see her striding quickly away, hips swaying, hair tossed back with a snap of her head. Gone is the softness of a moment ago. Now, she’s all business, taking long strides in those heels like she was born in them with her back stiff and straight as a rod. Blyad. I take off after her. I don’t want to make a scene. Black Light has dungeon monitors everywhere, and everyone here considers us to be part of the entertainment. There’s no such thing as privacy at Black Light on a night like this. I hustle to catch up with Lady Luck, without calling her name. She’s near the exit. “Hang on.” I catch her elbow, then immediately release it when she shakes off my touch. “Don’t run.” When she whirls, she has fire in her eyes. “Red.”

“You’re my little kitten, Dolly,” he said in a firm tone, “and every good little kitten needs a strict but caring owner to tend to her needs.” A half-moan, half-whimper escaped her, and in the next moment, he noticed her fidgeting in place, pressing her thighs tightly together as she stood before him. “Some kittens call their owners Master, but you’re a very new baby kitten, so you’ll have a daddy instead, and you may call me Daddy throughout our scene, little kitten. Do you understand?” “Yes, Da-Daddy.” A fresh flush appeared upon her cheeks. He thought she looked radiant as she stood trembling with excitement and blushing bright red. “Good kitty. Now, step out of your heels and get down on your hands and knees like a sweet little baby kitten.”

“Ow? What hurts?” It was more of a demand than a question, although concern laced his tone. “I’m fine,” she said, slapping his hands away when he tried to pull the blanket open to look at her, feeling annoyed. Before he’d been mad when she hadn’t wanted to cuddle, now he was trying to end their cuddle session in favor of checking her over. “I can handle anything you dish out.” She’d meant it as a joke, but there was more of an edge to her voice than she’d intended, some of the feelings she’d had going into Roulette night making themselves known in that one simple statement. Master Elliott stilled. “What do you mean by that?” “Nothing, I’m just teasing,” she said quickly, but the damage had already been done. Strong fingers caught her jaw, forcing her to turn her head and meet his gaze. The expression on his face was guarded, but she could see the tension in his shoulders, the way his eyes blazed. “Are you trying to prove something to me?” Master Elliott asked. His eyes flashed with intense emotion. “Would you even have said your safe word if you needed to?”

“Are you afraid of the dark, Miss Payne?” They were in a room full of neon. “No, Sir?” His hand came up to catch hold of something near her face. She’d forgotten about the fucking blindfold. “A shame.” Latex swung over her face. Lights out. Unexpected by Measha Stone “I didn’t mean to sound rude,” she said, and she meant it. People threw her into the bitch category before getting to know her. She wouldn’t blame any of them. First impressions weren’t her strong suit. His lips cracked into a smile, not a pleased and handsome one, but rather a grin that soaked her panties—a knowing grin filled with dark and sinister promises. “I know you didn’t.” His fingers tightened, sending another jolt of fire through her scalp. “And I know you weren’t trying to manipulate me into letting you top from the bottom.” She opened her mouth to agree with him, but the arching of his brow stilled her tongue. That was exactly what she’d been doing. “I don’t think we’re supposed to start yet,” she said instead. His smile didn’t fade as his other hand caressed her jaw. “I can tell our couples are ready to get started, so everyone have fun and play safe!” Madison’s voice boomed over the crowd. “Now we are.” He released her hair. “Let’s go.”

“I’ll ask you outright, Ava, before we wrap up this lovely little scene: do you trust me?” “Yes, Sir.” There was a vehemence in her tone that hadn’t been in it before. A surety. Ava nodded again as her confidence swelled, in him, and in herself. “Will you trust me to take care of you even as I hurt you?” He dragged the rounded tip of the implement in his hand down the shallow valley of her spine. She closed her eyes, blew out a long slow breath. She knew what came next. “I think you’re the only one I do,” she murmured. Her cuffed hands gripped the head of the bench. “Maybe the only one I can.” His response was the backs of his fingers brushing over her cheek before he moved away. “We’re going for ten, little dove. Move and I’ll tie you down. Remember to breathe.”