I have never had a therapist I didn’t want to murder where they sat. As a collective group they all say there is no way around grief, only through it, but for me, grief has become who I am. The idea of shedding it is as ludicrous as stepping outside of my own skin.

The fact is, some 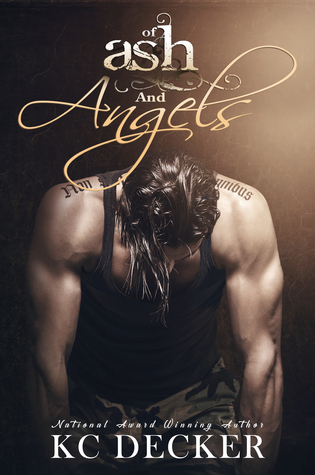 things can break you. I mean, shatter your soul and cast it into the wind in a billion tiny pieces. To think you might one day be able to find all those infinite pieces of yourself, patch everything back together, and move on with life—well, I don’t even need to dignify that with a response.
Norah:

A few months ago, I shaved off a hundred and eighty-five-pound parasite. Then, once I was rid of him, I wondered why I didn’t just stick it out because the dating world is treacherous these days. Turns out, so is unemployment.

I suppose, to offset all the swiping left and Netflix binging in my life, I should take this job. There is a massive problem with the position though.

The problem’s name is, Justin Abernathy.
Of Ash and Angels, is an emotionally-charged love story that weaves together an unforgettable tale of loss and surrender, with the beauty of love and second chances. It’s a deeply moving illustration of perseverance and the indomitable strength of the human spirit.

KC Decker enchants the reader with a masterful depiction of the power of love. She provides an emotional promise while imparting a gift…

The gift of a second chance at life.

Sometimes life isn’t fair. It gives too much to some people and takes away more from other people.

Justin is living in his own bubble. We all know what happens to bubbles – they break. The poor guy just can’t seem to catch a break. Right now he’s teetering on the edge. His BFF Davis knows what will fix him, or at least he thinks he does. Justin hides his secrets and doesn’t say a thing to Norah about what is going on. He’s still playing his game, only this time he’s trying to rope Norah in. Can he give up the little bit of happiness he has on a chance with Norah? What if it’s not enough for her?

One day a teacher, the next a baby sitter for the elderly. Who knew her life would be so glamorous? Not Norah! When she knocks on the Abernathy door, she is greeted by a hunk of a man, who is NOT elderly. What’s going on? They work side by side doing things around the house until he lets her in on a little, ok maybe HUGE secret. He is Mr. Abernathy and he was coerced into hiring her for help. At this point, Norah is all in. She likes what she sees and understands that he does too. Mysterious is good, but too mysterious is worrisome. When the bubble bursts and Norah sees what Justin is dealing with, she melts with him. Can Norah accept Justin for who he is? Or will she walk away?

This is another great book, by one of my favorite authors. Ms. Decker creates characters that you fall in love with. Not only the main characters but also secondary characters. I hope Davis and Sof get a book – HINT HINT! When Justin’s story was fleshed out, I cried. I wept for this character in a book! He’s not real, I know that, but the way KC wrote him, he felt real to me. *SIGH*

The banter between the characters is great. I love the dual POV. I think having both sides of the story is important, someone always sees something different. Not only that it’s nice to have the guys perspective on things that are happening too.