Dreams of 18by Saffron A Kent 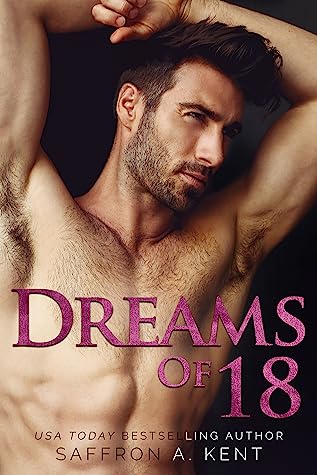 “You don’t go around kissing your best friend’s dad, do you?
Even though that’s all you ever dream about.”

Violet Moore is in love with a man who hates her.

Well, to be fair, she kinda deserves it.

On her eighteenth birthday, she got drunk and threw herself at him, causing a huge scandal in their sleepy suburban town.

Now everyone thinks she’s a slut and he has disappeared. Rumor has it that he’s been living up in the mountains of Colorado, all alone and in isolation.

But Violet is going to make it right.

She’s going to find him and bring him back.

No matter how cruel and mean he is, how much he hurts her with his cold-hearted and abrasive ways, she won’t give up.

And neither will she think about his tempting lips or his sculpted muscles or his strong hands. The hands that she wants on her body, touching her, feeling her skin…

The hands that make her want to forget everything and kiss Graham Edwards – Mr. Edwards, actually – again.

Because you don’t go around kissing your best friend’s dad, do you?

Even though that’s all you ever dream about.
____

Lately, I’ve been reading a lot of Daddy romances. Just something about an older man who knows his way around a woman’s body. Anyhow, this book follows those lines of an older man and a younger woman.

Violet is lonely. Her mom is drunk most of the time, her ‘dad’ is always away and her sister is too busy to bother with her. But Vi has her own plans. She is mooning over her BFF, Brian’s dad, who is double her age. On her 18th birthday, she kisses him, and a scandal erupts. Forcing her BFF and his dad to flee the drama she caused. Vi lost her bestie and the only man she’s ever loved. She spirals out of control and vows to make amends with Mr. Edwards. No matter what the cost to her self. What about when he learns the truth about her? Will he accept her? Or will he discard her as everyone else did?

Graham is stunned that Violet Moore is standing before him. He didn’t expect or what this. What he wanted was to never see her again and he hoped drinking and disappearing from the East coast would help that and it did for a while. But now she’s here. In the flesh. Doing things for him, cleaning his cabin, taking care of the roses, and taking care of him. All while she sucks on a lollipop and looks at him with those innocent eyes! It was enough to drive a man crazy! Even when he tries to send her away, she just returns. She’s an adult now, yet so young compared to him. Could this work? What about his son who had a crush on her? It would only be fitting if Graham stepped away to let Brian try with Vi. Yet when Vi says, Mr. Edwards all the blood in his body flows to one-stop and he can’t help himself. They are both doomed.

Ok, what I liked about this book is that Graham is a tough bird. He tries to keep Vi at arms distance because he knows what other people will think. He shouldn’t care, but he does for her. Everything he does is for Vi. For her safety and well being. At least he thinks it is. I like that he is honest with her, he can’t give her what she deserves. But it’s what he thinks she deserves, really she only wants him. But he’s too stubborn to see that.

What I didn’t care for, Vi’s age. She’s 18 going on 19. I prefer to read about 20 something women in this type of relationship. I know it’s one year difference but I feel like Vi was so innocent in the world because her mom didn’t protect her or explain the world to her. Ms. Kent writes an amazing innocent girl. Kudos for that.