Everyone lies.  When working for a sex mage, it’s the only way to stay safe.

That’s the first thing Jaeda learns when she’s named as the Chosen.  The mage needs a sacrifice, and she’s willing to give it.  Maybe too willing.  After all, this man is lust incarnate; a woman would have to be insane not to want him, even if he is dangerous.

But desiring someone’s body is very different from falling in love.  In her line of work, the two must never be confused.  She doesn’t even know his name!  He’s simply The Jackal, a terrifyingly powerful sex mage, and she’s his altar.  Her lust fuels him.  He needs it. 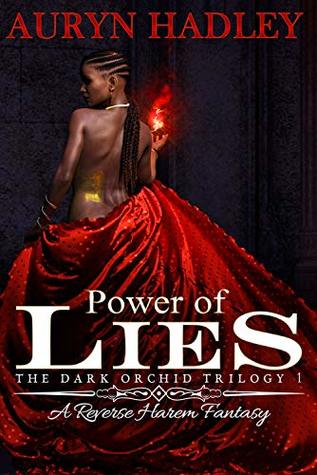 And that puts her in control.

Now, she gets to spend her days with a mage who wields sex like a weapon and his assistant who’s as irresistible as some long-lost god brought to life.  The things they do to her body are amazing, and the rest? These men want to spoil her with the kind of riches she’s always dreamed of.  It’s the best job she can imagine.

Unfortunately, it’s never that easy.  This is supposed to be about making magic – that’s it.  Feelings have no place in a mage’s temple.  Affection is a curse.  But when the enemy decides she’ll make the perfect weapon to steal the Jackal’s power, what’s she supposed to do?  After all, she’s just a stupid girl caught in the middle.  Her job is to just lie back and take it.

Except, someone’s been lying.
It might even be her.

POWER OF LIES is a complete novel with a reverse harem, polyamorous storyline.  It is intended for a mature audience due to the presence of consensual sex, group sex, M/M scenes, and plenty of vulgar language – as well as some potentially triggering violence since the bad guys don’t always play nice.  While this is a love story, it may not be right for all readers.

This is my first Auryn Hadley book.

A new mage, Lord Jackal,  has come to town and he’s looking for lust.  Lust?  Yes lust.  After wrangling up all the people, he finds Jaeda, a whore who is willing to perform for him.  She will be filling him with the lust that he needs to survive, as long as the Spider stays away.  Treb, who is the Jackal catalyst performs with Jaeda to fill the mage’s magical cups.

Then the tables are flipped and Jade is not just a sacrifice for lust, she is now a mage of her own.  The Jackal keeps her in his web, away from Spider if he can.  Yet somehow the Spider understands who she is to the Jackal.  Treb and Jade due their best to keep the Jackal safe from the Spider.

Ok, this book is 75% sex.  No big deal, I love sex in my books and in real life.  However there was so much sex in this book it took away from the actual story.  I get that Jackal is a Lust mage and needs to have that going on @ him to fill his magic.  I’m sure there are other ways of doing this.  I lost sight of the point of this book many times and would just skim the sex scenes.  It just wasn’t doing it for me.  But that is my opinion!